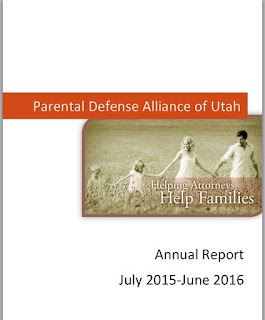 Our contract with the State requires that every year, the PDA compile an Annual Report and deliver it to the members of our Oversight Committee. For those of you interested in reading this year's report, you can find it here.

I wanted to provide you with a behind-the-scenes look at what your tireless board has been working on for the last few months. The blog has basically been radio silent since my appointment as the new Executive Director of the PDA, but that doesn't mean we haven't been busy! Actually, quite the opposite is true, and the blog meanwhile fell a bit by the wayside, for which I offer sincere apologies.

Firstly, I want thank our exiting Executive Director, Kate Hansen, for making this as seamless a transition as possible. Kate graciously stayed on to train me as her replacement, despite being much in demand in her private practice, and still provides guidance to the PDA as needed. She has been an incredible asset to the PDA for the last three years, and will be very much missed moving forward.

One of the last projects Kate was working on before handing the reins over to me was the Parent Video, a collaborative effort between the PDA and the Court Improvement Program. About a year ago, the Table of Six approved a budget of $10,000 for the production of a parent video project, to be spearheaded by Gabriella Archuleta of the Court Improvement Program and the PDA. After viewing similar videos produced in other jurisdictions, the PDA and the CIP determined that the videos with the most impact were the ones that featured parents telling their own stories and experiences, while offering suggestions on how to navigate the unfamiliar landscape of juvenile court.

After vetting several local production companies, the PDA and CIP hired Storyline Films to produce the parent video project. A basic script was drafted, with input from various members of the PDA, which was then circulated through the juvenile court judges for their input. The video was shot in July, with participants from every agency in the child welfare community providing cast members and support. 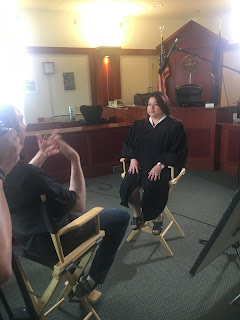 Judge Bazzelle was selected by the juvenile court judges to participate in the video. Her background in broadcast journalism quickly became evident, and made for some great sound bites. 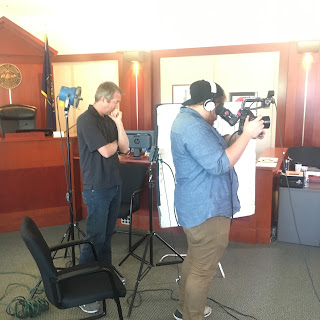 Andy Weibe and his crew were incredible to work with. The quality of the footage they were able to capture was extraordinary. 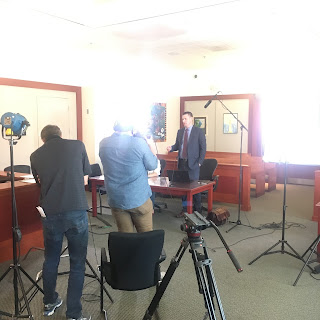 Grant Dickinson represented parental defense attorneys in the video. He did a fantastic job, even if his demands for a personal trailer were a little high-handed.

The first day of filming was done at the Matheson Court House, and the second day was completed at the new DCFS building in Sandy. We had three parent volunteers share their stories of perseverance and ultimate success for the video: Christianna Dees, Dusty Pyper, and Stephanie Garff. These women were incredible. Their stories were vulnerable, eloquent, and uplifting by turns, and they truly provided the heart and soul of the video.

A near-final draft of the video was debuted at the recent Court Improvement Summit, which many of you attended. It was incredibly frustrating, but the video was not able to be shown in its entirety due to internet issues with the venue. However, the final video will be completed by the end of September. At that point, the PDA will host it on its YouTube chanel, and provide a link to all of you. You will be able to share that link with your clients, who will be able to watch and re-watch the video whenever they wish to do so. We hope it will be a useful tool for all of you in your practice of parental defense.

As those of you who attended the CIP Summit may have noticed, PDA members presented on multiple topics, and were very well-received by their peers in the child welfare community. Neil Skousen and Brent Hall yet again presented on application of the ADA in child welfare cases, and they were by far one of the most popular break-out sessions of the Summit. Also, PDA members Erin Hill, Jason Richards, Ron Wilkinson and Josh Wilkinson presented on a panel concerning post-adoption agreements. Their expertise in a sensitive area of child welfare practice was much appreciated by attendees.

As a final note, I also wanted to take this opportunity to encourage as many of you as possible to register for our upcoming multi-hour CLE event: the PDA's Appellate Practice Workshop. You can register for the workshop here.

As you are all aware, the obstacles parental defenders face on appeal are daunting, and can seem insurmountable at times. At this event, participants will have the unique opportunity to pick the brain of Judge Christiansen of Utah Court of Appeals, as well as that of the Clerk of Court, Lisa Collins, for insight as to how we can be more effective, and ultimately, successful in our appellate attempts. There are also still plenty of spots open for anyone wishing to field a couple of moot type questions from Judge Christiansen to sharpen their oral appellate skills. Please email me if you're interested in that opportunity.  Further, Professor Kristin Gerdy, Director of the Rex E. Lee Advocacy Program at BYU, and mentor to BYU's traveling moot court team, will also be providing insight on how to make appellate briefs more persuasive on multiple levels. We have received so much support and enthusiasm from the staff of the Court of Appeals for this event; I truly believe they want to help us be more successful in our appellate practice. In fact, they have mentioned an interest in potentially making this a yearly-opportunity if sufficient interest is garnered at this event. Imagine what kind of useful tactical information we could accrue with that kind of ongoing input from the Court of Appeals! I'm certain that all of us could glean something useful from this CLE event. I look forward to seeing those of you who are already registered, and hope to see many more of you still.

As always, don't hesitate to reach out to me or any of the other board members if you have any questions, concerns, or updates of which the PDA should be aware.